High tension with twists and turns galore! Chris Simms has done it again with Loose Tongues!

I can’t wait to pick up the other books in this series. 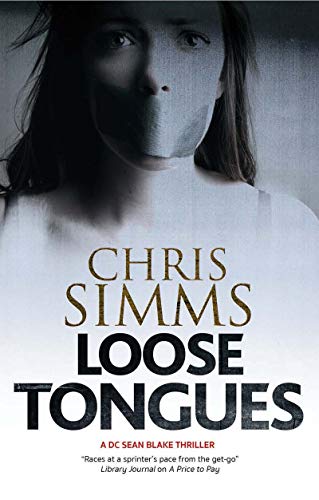 DC Sean Blake is confined to his desk after a botched interaction trying to scoop up a serial killer that leaves his partner wounded. Now he’s stuck to his desk chair trying to solve a string of gruesome murders.

Newly-qualified DC Sean Blake must tackle a series of bizarre and brutal killings in his first week on the job.

A series of chilling murders has left Manchester in a state of terror. Women are being found dead in their homes, their bodies arranged in the same macabre pose. Each has been strangled, her mobile phone forced down her throat.

How is the killer getting in to each victim’s house? What have they done to become a target? Why have none put up a fight?

Fresh-faced and full of enthusiasm, newly-qualified Detective Constable Sean Blake has just landed a position on the investigating team. Desperate to prove himself, Sean realizes that, if he is to catch the killer, he’s going to have to think outside the box. But is he prepared for the vengeful wrath of a truly twisted mind…?

I was born and brought up in rural Sussex, three miles from the nearest shop. Childhood holidays – which lasted for weeks as my dad was a teacher – were spent in a secluded spot in the heart of Exmoor. Sitting round the campfire at night, the haunting cries of owls floating in from the blackness beyond the flames, he would read me the ghost stories of MR James. The short walk to the safety of my tent was always taken at a sprint.
Books that interested me growing up? Plenty of mysteries – especially the Alfred Hitchcock and The Three Investigators series. I also loved Roahl Dahl’s Tales of the Unexpected and read plenty of Pan Horror Stories, too.
Later, it was novels that gave insights into unusual minds: the twisted desires of Frederick in John Fowles’, The Collector; the tormented thoughts of Scobie in Graham Greene’s, Heart of the Matter; the violent urges of Francie in Patrick McCabe’s, Butcher Boy all had a major influence.
After school and university came a series of abysmal jobs punctuated by travelling. Quite a lot of travelling, actually. Then, just after my 30th birthday, the idea for my first novel came to me. I was broken down on the hard shoulder of a motorway in the early hours of the morning, waiting for a rescue vehicle to arrive. It’s about the driver of a van who roams the roads in the dead of night, looking for stranded motorists to murder…
Ideas for subsequent novels have occurred at all sorts of odd moments: glimpsing a derelict church from the window of a moving train; browsing a newspaper report about a walker who claimed he’d been attacked by a panther; half-reading a doctor’s surgery article on how some tinnitus sufferers don’t hear whistles or buzzes – they’re tormented by birdsong; listening to a radio program about a flotilla of yellow ducks that fell from a cargo ship and floated slowly across the Atlantic.

Press Enter To Begin Your Search
×
A walk In a Book