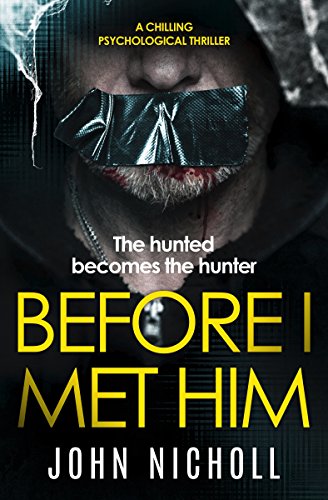 Every once in a while the hunters become the hunted…

When Rebecca’s childhood abuser avoids prosecution, it sets her on a path to revenge and soon she is handing out retribution on any man who preys on the innocent.

The twenty-three-year-old poses as a child online and sets her trap, luring one predatory sex offender after another to their deaths.

When a severed head is found washed up on a windswept estuary beach, DI Gravel and his team are called in to investigate.

In what might be his toughest case yet, DI Gravel finds himself asking if vigilante justice is ever justified…

Read this chilling new psychological thriller and decide for yourself.

Rebecca perched on the edge of her single bed with her computer resting on her lap, tip tapping the keys with a rapidly moving red-painted fingernail. She adjusted her reading glasses with her free hand, stared at the screen, and shook her head as multiple beads of sweat formed on her brow despite the winter chill. The filthy bastard was typing again … Brace yourself, Becca. Oh, for fuck’s sake. It was more of the same. Gross! No surprises there. He was nothing if not predictable. They all were. As transparent as polished glass. What else would he write? What else would he have to say for himself? It was always manipulative. Always with his ultimate goal in mind. That was why the slimeball was online in the first place. That was why he trawled the internet night and day in search of suitable prey. Tip tap, tip tap. Tap away, you misguided miscreant, you slug, you rodent, you societal curse. I know exactly what you are and I’m coming after you like a steam train.
Okay, give him time, Becca, give him time. If you gave them enough rope … His fantasies were becoming ever more extreme. His desires more perverse. And he was gaining confidence now. More sure of himself. Revealing his true nature like never before. He was telling her what he’d like to do to her. He was telling her what he’d like her to do to him in familiar graphic detail. And he promised generous gifts. Of course he did. Favours. Anything her little heart desired, if she entertained his proposals and satisfied his longings. The cost was unimportant. The expense of little, if any, consequence. It was up to her. Just choose. That’s all she had to do. Designer clothes, trainers, a new mobile, the very latest top-of-the-range computer, and a pony. Even a frigging pony! He was playing his best cards now. And he really believed he was winning. He thought he was approaching the endgame. He could smell it, taste it, almost touch it. This middle-aged husband and father who believed he’d been exchanging daily messages with a ten-year-old schoolgirl for almost six weeks. The outwardly respectable man who’d gradually upped the ante and sent her photos of his flabby milk-white naked body with his face carefully hidden. Always hidden. If she agreed to meet, he’d give her anything she wanted. As long as she told no one. As long as it remained their special secret, he’d give her the world. Of course he would. He’d give her the frigging world.

She took a slow deep breath, in through her nose, and blew the air from pursed lips with a barely audible whistle. He was hooked. The slippery bastard was well and truly hooked. She had him. It was just a matter of time. If he thought he was grooming her, he was very sadly mistaken. Ha! Who was hunting who now? Predator had become quarry. Okay, her childhood abuser had avoided prosecution. He hadn’t paid a suitably high price despite her disclosures. Despite her determined protestations to any trusted adult who was willing to listen. He’d got away with destroying her childhood innocence. He’d damaged her and he’d damaged her family. But this one would pay. Oh yes, the sick bastard would pay. It was time to pounce. Time to sink in her claws. She was a roaring lioness now, not the cowering mouse of the long gone past. It was time to drive home her advantage and reel the bastard in.

John Nicholl, an ex-police officer, child protection social worker and lecturer, has written six darkly psychological suspense thrillers, each of which has been an Amazon # 1 bestseller. John is happily married, lives in rural west Wales, and has three adult children and one grandchild, with a second expected in August 2018. He began writing after leaving his job heading up child protection services for Carmarthenshire.

John is represented by Toby Mundy – Literary agent at TMA.

You can find out more about John and his books at: http://www.johnnicholl.com