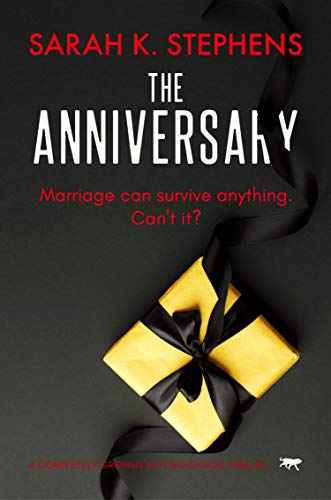 Until death do they part…

Mary and Jackson are spending their one-year wedding anniversary in a remote luxury cabin. They married after a whirlwind romance, and soon after the wedding, Jackson left for a nine-month work placement halfway across the globe.

Now that Jackson’s back, Mary is determined to make her marriage a success. The trip has a promising start, but things begin to unravel when Mary reveals to Jackson the truth about her past and the secret that drove her family apart.

When a hike results in Mary almost falling to her death, suspicions she has about her new husband rise to the surface. Surrounded by forest for miles, and without reliable phone reception, Mary realizes she is totally isolated with a man she barely knows.

The days of their delayed honeymoon tick by and Jackson’s devotion transforms before Mary’s eyes into something more sinister. As her own mental state deteriorates under the pressure, Mary is left with only one question:

Can she save herself before her husband loves her to death?

I couldn’t put this one down right from the moment I picked it up! I was looking for something a little out of the ordinary, maybe a little romance and a whole lot of mystery. That’s exactly what I got.

First, the description above doesn’t even begin to cover what’s going on between the pages and I can’t say too much without giving something away!

Let me just leave you with this…everyone intertwines perfectly that you can’t even see who’s against Mary or on her side. It’s like you don’t know where one begins and the next one ends.

It’s a must read for sure!

About the Author – Sarah K. Stephens

Sarah K. Stephens is the author of three novels and a developmental psychologist at Penn State University. Although Fall and Spring find her in the classroom, she remains a writer year-round. Her writing has also appeared in LitHub, The Writer’s Chronicle, Hazlitt, The Millions, and The Indianola Review.

Her debut novel, the psychological thriller A Flash of Red, was released in 2016. Bethanne Patrick, regular reviewer for NPR Books, NBCC Board Member, and LitHub contributing editor, noted that “Stephens offers readers a new perspective on crime psychology, enhanced by her professional expertise. Fans of books by Mary Kubica and Fiona Barton will enjoy the story of Anna Kline, her disintegrating marriage, and her very dark secrets.” America’s librarian and BookLust author Nancy Pearl said that “A Flash of Red does a great job developing its three main characters; I’m still wondering what happened to them after the book ended,” and Underground Book Reviews called it “Highly recommended. . . cleverly plotted. The story itself was full of such intense intrigue and psychological manipulation that I could not put it down.”

Sarah’s psychological thriller, It Was Always You, was released by Bloodhound Books in November 2019. J.L. Delozier, author of International Thriller Award-nominee Type & Cross, says “With a cast of flawed characters and a simmering plot which explodes in a jaw-dropping series of twists, It Was Always You brilliantly showcases the psychologist author’s intimate knowledge of the human psyche. Gillian Flynn fans—this one’s for you!” and Dea Poirier, best-selling author of Next Girl To Die, declares “This gripping psychological suspense will keep you guessing at every turn. Get ready for a wild ride that will have you begging for more.”

Her newest thriller, The Anniversary, was released in March 2020 by Bloodhound Books. Check out why readers are calling it “a chilling psychological thriller that will have you glued to your seat,” “a roller-coaster of a story,” and “one of the best mind-bending, thrilling books I’ve read in a long time!“

Sarah loves using her psychological training to craft darkly human stories with killer twists. When she’s not plotting death and betrayal, she can be found enjoying the pleasures of country life with her husband and children in Central Pennsylvania.