I’m beyond excited to share some news from one of my favorite authors, London Clarke!

That’s right, she’s got a new book out as of May 5th and it’s definitely on my #TBR pile! In fact, it made it’s way up to the top rather quickly as soon as I saw that it was available now. I invite you to step into a dark and twisted world with romance, adventure and yes darkness!

Read below for more info and I’ve got a snippet from the 1st Chapter below that will surely get you hooked! 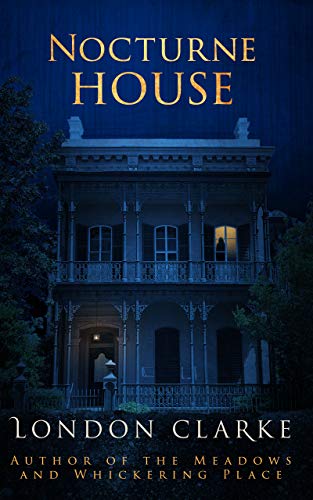 “If you’ve read previous books by London Clarke, then you will love this one. If you haven’t, she’s about to become your new favorite author.”—Readers’ Favorite

After months of searching for his missing wife, ex-priest turned demonologist Hunter Massabrook receives a call that Laura has turned up in a New Orleans hospital. But the woman barely looks like his wife, and she’s going by a different name. Worse, she’s obsessed with another man and memories of a life she’s lived in a place called Nocturne House.

As Laura relays the story of her disappearance and the people responsible, she also reveals her connection to a dangerous cult, a group of modern-day vampires that controls and manipulates through psychological strongholds, supernatural entities, and all-too-human wicked intentions.

Hunter soon realizes that Laura is still in danger, and she remains bound to the house through her heart, mind, and blood.

In the final suspenseful installment of the Legacy of Darkness series, supernatural and human evil collide in a tale about the power and danger of living outside society’s expectations and the relationships that can ruin or redeem us.

London Clarke is the award-winning author of Wildfell and the Legacy of Darkness series. Obsessed with vampires and haunted houses from a young age, London grew up reading gothic tales like Wuthering Heights and Dracula, featuring romance, tragedy, and tortured souls. She considers herself a recovering runaway and confesses that she once moved to England in search of a man who was the perfect amalgamation of Dracula, Hamlet, Heathcliff, and Mr. Rochester. London graduated from George Mason University with a B.A. in Music and M.F.A in Creative Writing and has had an eclectic array of jobs including receptionist, legal secretary, literary assistant, high school English teacher, and freelance editor.
London lives in a Washington, DC suburb with her husband and two Italian greyhounds. She’s happiest when she’s writing novels, reading books, or re-watching her favorite programs like The Vampire Diaries or Being Human.

Hunter Massabrook scans the lecture hall. It’s nearly full. A few students stand at the back, their arms crossed like bouncers at a concert. Seated students stare at him and scribble notes. Some record him on their phones.

When the university hired him to teach paranormal studies courses, he had no idea the classes would be so popular. Although titling a course Demons and Demonology might account for the number of enrollees.

“In 1459, Alphonso de Spina, a great teacher and a member of the Order of Friars Minor, wrote Fortalitium Fidei, or fortress of faith, a five-book treatise to admonish those who would deny or criticize Catholicism. In the fifth book, de Spina describes demons and their violent hatred toward humanity, and he classifies them.”

Removing the cap from a green whiteboard marker, he turns his back to the class, places the felt tip against the board. The astringent smell drifts into his nostrils, and his eyes water.

Wandering groups or armies of demons

Cambions and other demons that are born from the union of a demon with a human being.

Demons that attack the saints

Hunter pivots back to his audience. “Each of these has specific criteria to their classification, and over the next few classes, we’ll dedicate time to discussing each of them in detail.”

A hand in the third row shoots up.

The young man leans forward, his eyes shielded by a baseball cap with the logo for the Tar Heels printed on it. “Didn’t Agrippa use a different classification system?”

“Yes.” Hunter taps his marker against the whiteboard. “Agrippa had several classification systems for demons. King James also wrote a classification, and so did Binsfield and Michaelis. All of them slightly different. But these are some of the oldest groupings we have.”

“Which one is right?”

Hunter pitches the green marker onto the table. “That’s open for debate, and for you to determine within your research papers.”

He dismisses the class, assembles his notes, and begins stuffing them into his bag. His phone buzzes against the tabletop. Detective Lisa Ballard’s name and number appear. It’s been weeks since he heard from her. He swipes the screen.

“Hunter, I have some news. We think we’ve found Laura.”

His heart convulses. Gripping the cellphone, he presses it hard against his ear. “Okay.” Then he focuses on her voice, her words.

Detective Ballard’s tone sounds unsure, a little shaky, possibly flooded with adrenaline. Moments like these are probably shining stars in detectives’ worlds. For him, it’s hard to know how to react. It’s been over five months since his mentally ill wife disappeared. And anyway, there’s still that “we think we’ve found” part of her sentence that stops him.

“Yes, I’m here. Where? Where did you find her?” He tries to keep his voice steady as another thought cuts in. Ballard didn’t say they found her alive.

“In New Orleans,” she says.

New Orleans? “What’s she doing there?”

“We don’t know. We think she was living in a house with a group of people.”

“You keep saying you think, detective. Don’t you know?”

She clears her throat. “Well, right now, the woman we think is your wife is in the hospital in New Orleans. She’s apparently in pretty bad shape. Physically and . . .  psychologically as well.”

That’s a given. Laura hasn’t been in good shape psychologically since they were kids.

“At first,” she continues, “we were told the NOPD couldn’t get a word out of her, but now she’s saying her name is Vanessa Ruthven. Says she’s married to a man named Alex.”

“What?” Hunter rubs the back of his neck. No, then it can’t be Laura.

“She didn’t have ID on her. But an informant told us Vanessa Ruthven wasn’t her real name—that she’s actually Laura Massabrook.”

Informant? Hunter grasps a handful of the fabric of his shirt, right over his heart. His chest hurts—like someone hit him with a sledgehammer. After waiting five months for this phone call, he’s faced with words like informants and hospitals. But if this really is Laura, she’s alive, and that’s what matters.

“Laura has been in and out of psychiatric treatment centers for years. Before she went missing, that is.” Hunter has told Ballard this a dozen times. Now he says it to fill the space while his thoughts somersault and nosedive over the cliff in his mind.

There’s a pause on the line. What else? Say something… When she doesn’t say anything else, Hunter takes a deep breath. “What now?”

“Can you get down to New Orleans?

“And Hunter…” Detective Ballard’s voice fades in and out with wavering cellphone reception. “… prepare … shocked … see her. I’m go—”

“I can’t hear you, detective. You’re breaking up.”

The line clears. “If the woman in the hospital is Laura, you will find her very changed.”