Excited, doesn’t even cover the amount of enthusiasm I have towards this book release. Thanks to Netgalley, I had an advanced copy that I devoured instantly, but to hold off on writing my thoughts was more of a challenge than I anticipated.

Now that it’s been released, I’m loving all the reviews for Little Lovely Things. It mixes folklore, mystery and suspense into one story. A desperate mother searching for her girls becomes the only think you can think about and it touches your soul in aways you wouldn’t expect!

“A shattering adventure.” — Jacquelyn Mitchard, bestselling author of The Deep End of the Ocean 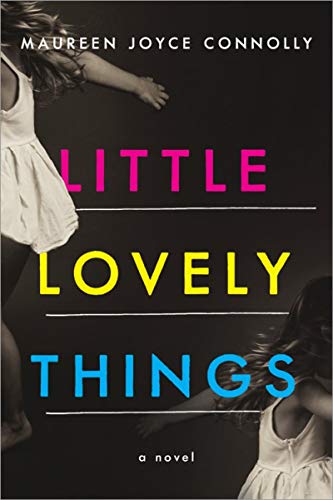 If only things had been different It is the wrong time to get sick. Speeding down the highway on the way to work, her two little girls sleeping in the back seat, medical resident Claire Rawlings doesn’t have time for the nausea overtaking her. But as the world tilts sideways, she pulls into a gas station, runs to the bathroom, and passes out. When she wakes up minutes later, her car—and her daughters—are gone. The police have no leads, and the weight of guilt presses down on Claire as each hour passes with no trace of her girls. All she has to hold on to are her strained marriage, a potentially unreliable witness who emerges days later, and the desperate but unquenchable belief that her daughters are out there somewhere. As hopeful and uplifting as it is devastating, Little Lovely Things is the story of a family shattered by unthinkable tragedy, and the unexpected intersection of heartbreak and hope.

“Debut author Connolly explores the emotional devastation that plays out after a woman’s young daughters mysteriously disappear. In 1991 Chicago, medical resident Claire Rawlings is driving her daughters to their daycare when she feels nauseous and stops at a gas station and rushes to the rest room and passes out. When she regains consciousness, Claire discovers that her car and her daughters, four-year-old Andrea and 15-month-old Lily, are gone. Police have few clues about who may have taken the girls. The impact on the lives of Claire and her husband, Glen, is shattering, and their marriage begins to unravel. As years pass and Claire can’t shake the guilt about feeling responsible for the disappearance of her daughters, she questions why Glen has never voiced his blame of her. Claire eventually meets with Jay White, a drifter who has given police some information that has assisted them in their investigation of the abduction of Lily and Andrea; Claire believes he may have psychic powers, leaving her with a sense of hope that her daughters are still alive. Connolly’s lyrical writing style and the fast-paced narrative draw in the reader right away. This is a riveting novel bolstered by its flawed, believable characters.” –Publishers Weekly

Maureen is a former owner of a consulting firm that helped specialty drug companies to develop medications for ultra-rare diseases. Maureen received her Bachelor’s degree in physiology from Michigan State University and her Master’s degree in Liberal Studies from Wesleyan University. Her background in science and love of the natural world informs and inspires her writing. LITTLE LOVELY THINGS is her debut as a novelist. She is also an award-winning poet, published in diverse outlets such as Emory University’s Lullwater Review and Yankee Magazine.

Maureen is a foodie and appreciates interesting recipes. She also enjoys painting (especially flowers and sycamore trees), competing in races with her dragon boat team (Go Fierce)!, and reading (of course). She relishes spending time with her three children, her husband and her pets; a ridiculous terrier named Huckleberry, and a plump orange cat, Pumpkin.