Just No! I hate to say that about any book as you all know my feelings about writing and it being an art form in itself and to each is own. Beauty is in the eye in the beholder, especially with this one.

It started off ok and I had high hopes with it being in the Horror genre, but as it went on, the sentences became disjointed and turned into pure chaos. The warning message at the beginning of the book is true, put it down, it’s dangerous to read!

That being said, it’s not my thing but it could very well be yours and I commend anyone who goes through the hard work it takes to get your words on a page and in between the covers.

Thank you to Netgalley, Brian Kirk, and Flame Tree Press for the advanced reader copy! 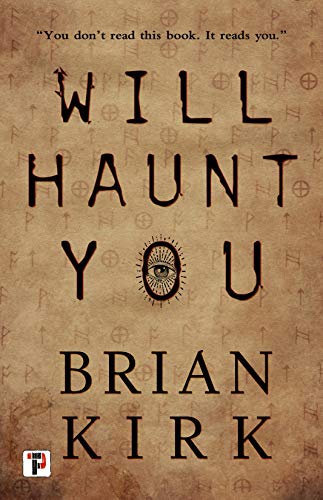 You don’t read the book. It reads you. Rumors of a deadly book have been floating around the dark corners of the deep web. A disturbing tale about a mysterious figure who preys on those who read the book and subjects them to a world of personalized terror. Jesse Wheeler—former guitarist of the heavy metal group The Rising Dead—was quick to discount the ominous folklore associated with the book. It takes more than some urban legend to frighten him. Hell, reality is scary enough. Seven years ago his greatest responsibility was the nightly guitar solo. Then one night when Jesse was blackout drunk, he accidentally injured his son, leaving him permanently disabled. Dreams of being a rock star died when he destroyed his son’s future. Now he cuts radio jingles and fights to stay clean. But Jesse is wrong. The legend is real—and tonight he will become the protagonist in an elaborate scheme specifically tailored to prey on his fears and resurrect the ghosts from his past. Jesse is not the only one in danger, however. By reading the book, you have volunteered to participate in the author’s deadly game, with every page drawing you closer to your own personalized nightmare. The real horror doesn’t begin until you reach the end. That’s when the evil comes for you. FLAME TREE PRESS is the new fiction imprint of Flame Tree Publishing. Launching in 2018 the list brings together brilliant new authors and the more established; the award winners, and exciting, original voices.

Brian Kirk is an author of dark thrillers and psychological suspense. His debut novel, We Are Monsters, was released in July 2015 and was nominated for a Bram Stoker Award® for Superior Achievement in a First Novel.

His short fiction has been published in many notable magazines and anthologies. Most recently, Gutted: Beautiful Horror Stories and Behold! Oddities, Curiosities and Undefinable Wonders, where his work appears alongside multiple New York Times bestselling authors, and received an honorable mention in Ellen Datlow’s Best Horror of the Year compilation.

During the day, Brian works as a freelance marketing and creative consultant. His experience working on large, integrated advertising campaigns for international companies has helped him build an effective author platform, and makes him a strong marketing ally for his publishing partners. In addition, Brian has an eye for emerging media trends and an ability to integrate storytelling into new technologies and platforms.

While he’s worked to make this bio sound as impressive as possible, he’s actually a rather humble guy who believes in hard work and big dreams. Feel free to connect with him through one of the following channels. Don’t worry, he only kills his characters.