Thank you to Netgalley, Stan Schatt, and Tell-Tale Publishing Group for this ARC!

Wanting more out of his life, Bill leaves his high-powered career as a lawyer to open his own coffee shop and start new! He thinks he’s on the right path, even finding a new girlfriend, Amber who seems to have it all, until the rug is pulled out from under him.

Suddenly, his perfect small-town life is turned upside-down when he’s the suspect in Amber’s death. Now he has to figure out what really happened, and why he’s the target of some sick game that he didn’t know he was playing!

I enjoyed the plot but had hoped there would be a bigger reveal. It didn’t leave me shocked but it’s worth the read! 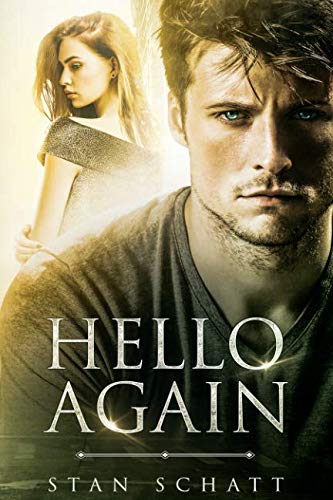 Bill Eisner escaped the high-powered world of dog eat dog and opened a neighborhood coffee shop. His high-maintenance girlfriend stayed behind. Now all he wants is a second chance in life, a chance to do something he enjoys and meet someone who can love him for who he is, not what he can buy her. The community loves him, the press loves him, and even the homeless think he’s one of the nicest guys around.Finally, he thinks he’s found true happiness with the woman of his dreams. Until she’s murdered. At her funeral, Bill discovers that the woman he loved had a lot of secrets and told him a lot of lies. But does it matter? She’s gone forever. Or is she? Her text messages say otherwise.The police don’t believe Eisner and suspect he might be responsible for his girlfriend’s death. Meanwhile the text messages become more and more threatening. When a car bomb blows up his car he is forced to accept that someone or something clearly wants to kill him.Hello Again combines the spine-tingling tension of a paranormal mystery and the descent into madness of a psychological thriller.

Stan Schatt has written forty books on a wide variety of topics including science fiction, mysteries, a chapter book for children, a YA novel, biographies of Michael Connelly and Kurt Vonnegut, Jr., and books on technology and career changing. His love for teaching is reflected in outstanding teaching awards he received from the University of Southern California and DeVry Institute of Technology.

Rather than having one career, Schatt has had several. He has worked as an autopsy assistant, an English professor, a software trainer, a law enforcement administrator, a market research executive, and a sales manager. He spent the last two decades as a technology analyst or ‘futurist” trying to figure out what future Description technologies will be successful.

“Marty Michaels is a hero for our times – complex, flawed and trapped in a nail-biting fight for his life.”

It’s the perfect amount of mystery, crime, and depravity with lovable and detestable characters wrapped into one book.

SOON TO BE A MAJOR MOTION PICTURE

In a quest for a simpler life, Helen and Nate have abandoned the comforts of suburbia to take up residence on forty-four acres of rural land where they will begin the ultimate, aspirational do-it-yourself project – building the house of their dreams.

“This gem of a historical from Richardson (The Sisters of Glass Ferry) features an indomitable heroine navigating a community steeped in racial intolerance. In 1936, 19-year-old Cussy Mary Carter works for the New Deal–funded Pack Horse Library Project, delivering reading material to the rural people of Kentucky…Readers will adore the memorable Cussy and appreciate Richardson’s fine rendering of rural Kentucky life.” –Publishers Weekly

Now, on the longest night of the year, the streets of New Orleans will become a battleground as Alice and the few she can trust engage in a war amid the final days of magic. But the revelations that lie ahead may be too dark to escape.

“Put my Life on Hold Until I finished it!”

“Fabulously fast paced, this psychological thriller has you gripped from the first page.”

The Killing Girl by Summer Prescott

I was truly enthralled with this graphic novel, if you’re not into gore and extra bloody details, this might not be the one for you.