These are all fun questions to have when you’re heading into a book, for me, I want to be surprised by the answers and shocked at the journey. Unfortunately, this one didn’t quite do it for me, but it’s only because I caught on to who the killer was early on and that’s no fun, unless of course, the switch is flipped and you were totally wrong!

The writing was fantastic but I would have enjoyed a little more character development, I didn’t love or hate any of them and although the detective investigating went the same school and knew the group, there was no history there. Nothing to make it juicy or exciting.

If you’ve read this, I’m eager to hear your thoughts! I didn’t love it but it was a 4-star read!

Thank you to Netgalley and Gytha Lodge for the ARC! 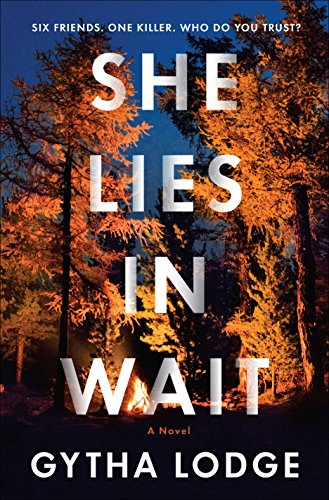 Six friends. One killer. Who do you trust? A teen girl is missing after a night of partying; thirty years later, the discovery of her body reopens a cold case in an absorbing novel featuring a small-town cop determined to finally get to the truth—for fans of Tana French and Kate Atkinson.

On a scorching July night in 1983, a group of teenagers goes camping in the forest. Bright and brilliant, they are destined for great things, and the youngest of the group—Aurora Jackson—is delighted to be allowed to tag along. The evening starts like any other—they drink, they dance, they fight, they kiss. Some of them slip off into the woods in pairs, others are left jealous and heartbroken. But by morning, Aurora has disappeared. Her friends claim that she was safe the last time they saw her, right before she went to sleep. An exhaustive investigation is launched, but no trace of the teenager is ever found.

Thirty years later, Aurora’s body is unearthed in a hideaway that only the six friends knew about, and Jonah Sheens is put in charge of solving the long-cold case. Back in 1983, as a young cop in their small town, he had known the teenagers—including Aurora—personally, even before taking part in the search. Now he’s determined to finally get to the truth of what happened that night. Sheens’s investigation brings the members of the camping party back to the forest, where they will be confronted once again with the events that left one of them dead, and all of them profoundly changed forever.

This searing, psychologically captivating novel marks the arrival of a dazzling new talent, and the start of a new series featuring Detective Chief Inspector Jonah Sheens.

Advance praise for She Lies in Wait

“The mystery intrigues and twists, offering enough red herrings and moments of police procedural to please fans of the genre.”—Kirkus Reviews(starred review)

“A dark, deep, terrific thriller and a scorching portrait of friendship and its betrayal.”—Nicci French, author of Day of the Dead

“A superior crime book . . . I loved it.”—Marian Keyes, author of The Break

“She Lies in Wait delivers on just about every level—a killer premise, an absorbing plot that twists and turns at just the right pace, and a lead detective who has hit the page fully formed and instantly likeable. One to watch!”—Caz Frear, author of Sweet Little Lies

Press Enter To Begin Your Search
×
A walk In a Book